Google Cloud is rolling out ActivStat, a set of real-time stats for fans of the Call of Duty League. The stats will help esports fans understand what’s happening in fast-moving matches and details such as who is likely to win a match in progress.

Millions of fans have been watching the CDL online, particularly since it was forced last year to switch to online-only events due to the pandemic. And ActivStat brings fans, players, and commentators competitive statistics in real time. Using ActivStat, live broadcasts will soon be enhanced with more depth and color-of-play while they’re happening, building excitement and adding to the overall experience, said Rob Martin, chief architect at Google Cloud for Games, in an interview with GamesBeat.

“The team at Google implemented Activision’s vision for this new offering in esports,” Martin said. “The first thing that we implemented is a real-time data pipeline. As the competitors are engaging in matches, there are literally hundreds of different metrics and statistics that are being captured and presented in real time. So there’s a real time data pipeline, making the data available within milliseconds or seconds.”

Technically, ActivStat is an entirely new capability for esports. It’s a constantly updating catalog of statistics that is sourced, analyzed, updated, and delivered in an easy-to-consume way across global-scale computing systems, with a latency of milliseconds or seconds rather than minutes or hours. By comparison, many of these stats today are available to fans after a day or more of processing.

Above: Kenny Williams is one of four players on the L.A. Thieves team in the Call of Duty League.

“We’re incredibly excited to be working with Google Cloud business, and ActivStat is going to be incredible for our fans, for our community, for our players, and for the viewer experience,” said Jack Harari, head of brand partnerships at Activision Blizzard, in an interview with GamesBeat.

Call of Duty League plans to begin rolling out ActivStat during the 2021 season. The initial rollout will include critical information like player and team standings and winning ratios across multiple aspects of virtual combat — including ultimately what these numbers mean for rankings. ActivStats are delivered both in raw statistics and via visualizations and graphics, providing commentators with fast access to the types of insights fans crave.

The Call of Duty League also announced that Major V, the next big tournament, will take place in-person at the Esports Stadium Arlington in Arlington, Texas. (During the pandemic, most of the CDL players moved to the Dallas area to get the best ping, or online interaction speeds.) The Major V will take place July 29 to August 1, while the playoffs and championship weekend will take place August 19 to August 22. The latter event will also take place in person. 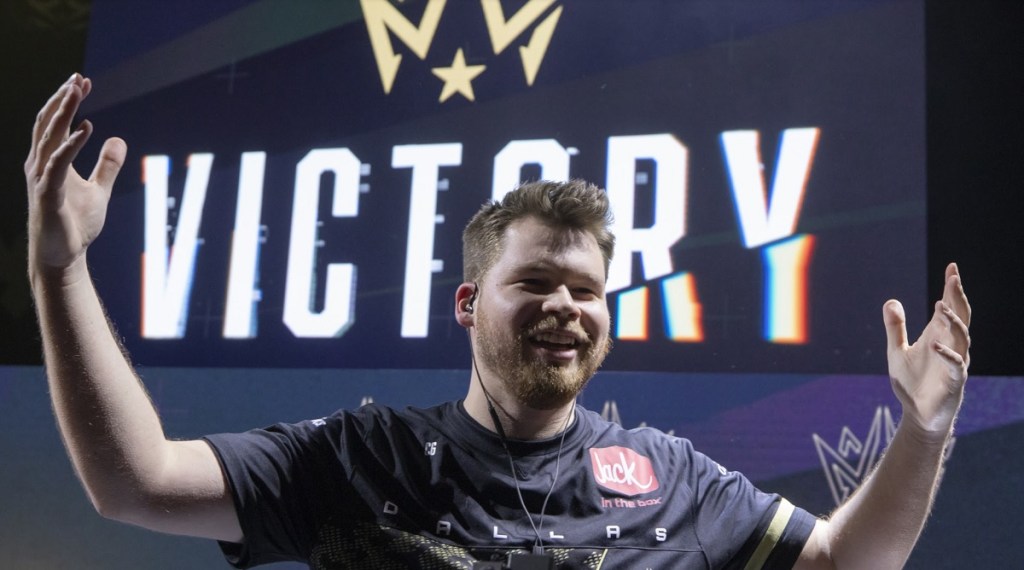 Above: Crimsix is one of the stars of the Dallas Empire.

Google and Activision Blizzard signed a sponsorship with Call of Duty last February, and they set up a Google Cloud partnership in January. So the teams have been working hard since that time to incorporate high-speed networking, data pipelines from multiple cloud sources, and data warehousing to create a user-friendly dashboard. Real data was flowing into commentator dashboards by April.

“Our first consumer of the data is the live commentators. Their color commentary is being enhanced in real time as the match is occurring, and really enabling them to surface more interesting insights and more quantitative analyses about the action that’s happening on the field,” Martin said. “We’ll be expanding in the future to drive real-time metrics directly into the live broadcast.”

Esports can be much more complex to cover in many ways than regular sports. Instead of a well-defined physical playing field (often a simple rectangular space), multiplayer games involve complex and sprawling virtual environments that can be the size of a large campus, such as an airport with multiple levels and hidden locations.

Gameplay between competitors happens across many of these locations simultaneously. In addition, competitors also each choose their own configurations of equipment, known as “loadouts,” which can dramatically affect gameplay and strategy. All of this additional complexity in online gaming involves data that needs to be captured, analyzed, and communicated to the fans in insightful ways. (When I play Call of Duty: Warzone, I’d love to know how successful other players have been with my exact loadout.) 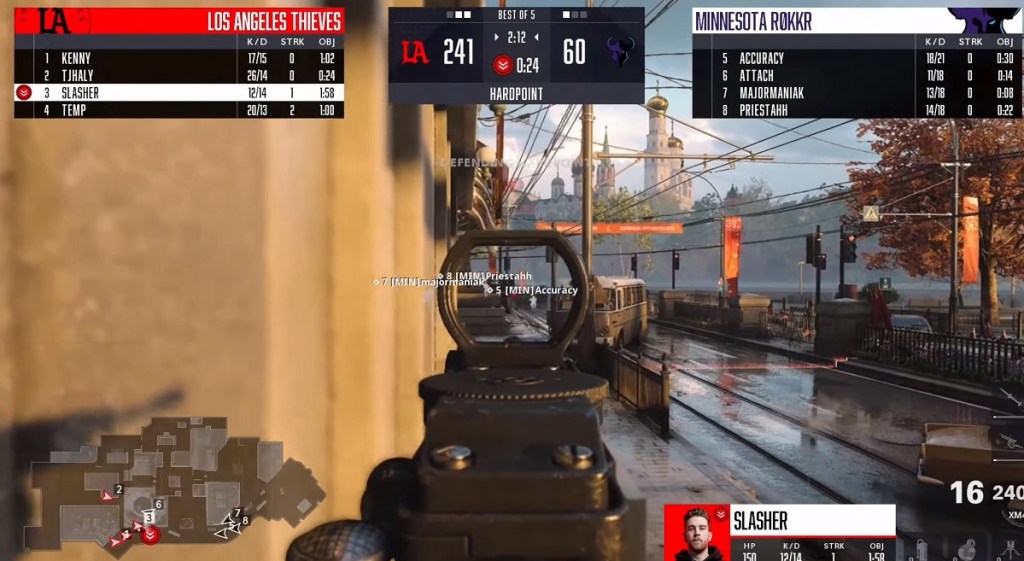 Above: The L.A. Thieves fought the Minnesota Rokkr in the opening match of the CDL.

Two Google Cloud technology capabilities play central roles in the operations of ActivStat. BigQuery — a planet-scale data warehouse that can store and query petabytes of information in real time — is the foundation of the ActivStat platform for gathering and summarizing millisecond-level statistics. Looker, an intuitive analytic dashboard, surfaces those insights to commentators in an easy-to-use, real-time dashboard that enables the commentators to speak to compelling insights and statistics in sync with the gameplay as it is happening in the live broadcast.

While the initial release of ActivStat for this season of Call of Duty League provides compelling and powerful capabilities, it’s only the beginning.

The esports matches are run on local servers in the competitive arenas. Google Cloud needs to transport the metrics that are happening tens of times per second within these matches to a centralized data warehouse, Martin said. Within milliseconds, a message has to leave the servers in the arena, it has to travel across the internet, to a global message bus, and reach the Google Cloud. And then Google servers have to ingest and transform that data into the data warehouse in less than a second.

The ActivStat tech will be able to shed light on overall team performance as well as individual metrics that would otherwise be only available after the event was over. It could calculate the odds of a single surviving player beating the other team’s four players in the rest of the match.

“Sometimes you get those sort of one in a million events that happen,” Martin said. “And those are really exciting for the fans. And so helping the commentators to quantify those types of events is super interesting for the fans.” 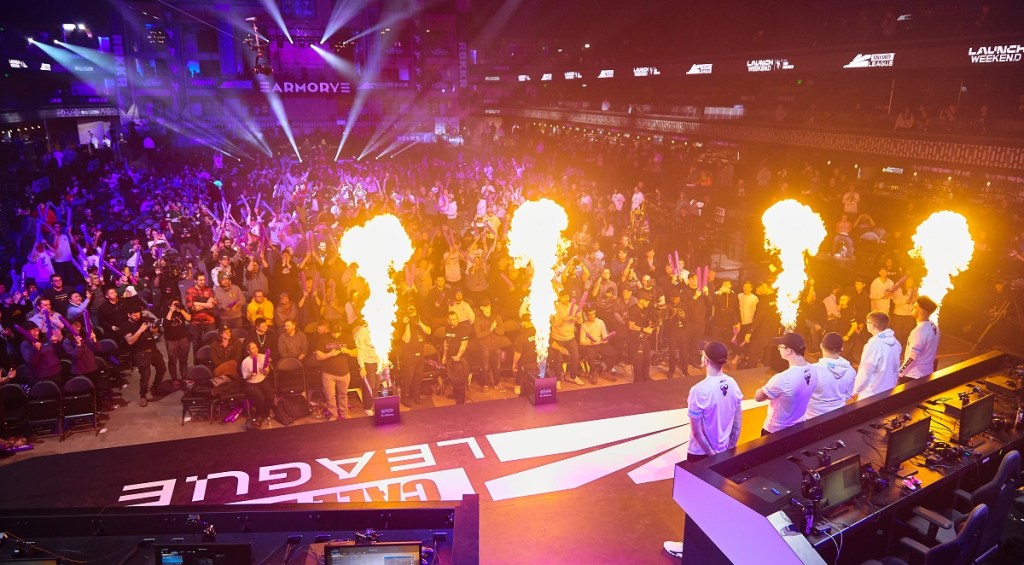 In the future, the engineers want to be able to display gameplay hotspots on the field and use that information in a “heat map,” Harari said. And that could influence where to place cameras using machine learning, Martin said. That enables broadcast producers to build excitement for fans by always being in the middle of the best action. Call of Duty League and Google will also look to drive statistics and metrics directly into the broadcast feed.

The implications of the real-time statistical capabilities of ActivStat go beyond gaming and esports. Historically, gaming has been at the leading edge of what computer processing, computer graphics, wide-area networking, data analysis, and insight can do. The real-time data ingestion and output used in ActivStat could one day be useful powering live broadcasts in other types of sporting events, as well as blending live video feeds and data to support use cases in health care, finance, manufacturing, and other verticals, Martin said.

The ActivStat agreement is part of a multi-year strategic relationship to power new player experiences, said Harari. Google Cloud handles game hosting infrastructure while YouTube is the exclusive streaming partner worldwide — except for China, where Google doesn’t operate — for the Overwatch League, Call of Duty League, Hearthstone Esports, and more. 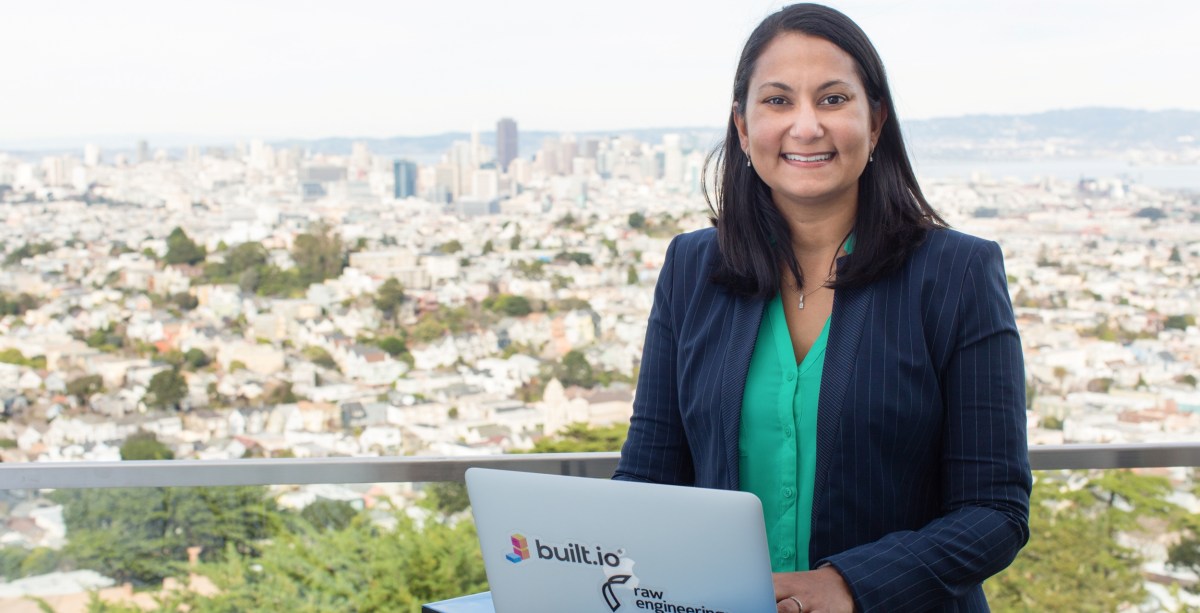 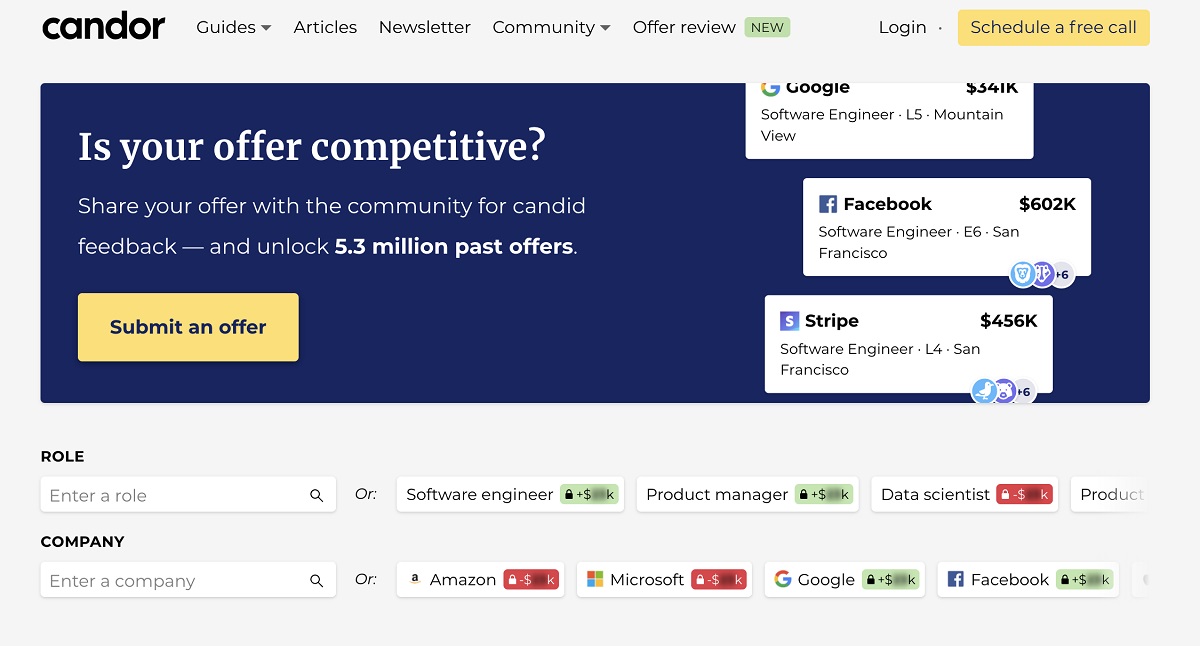 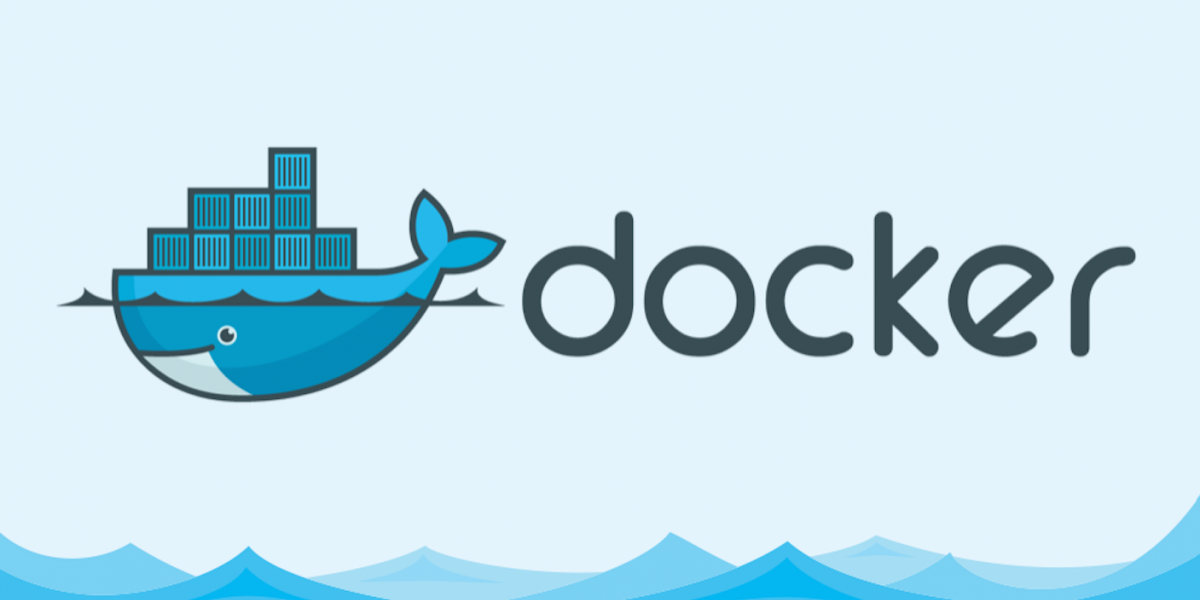 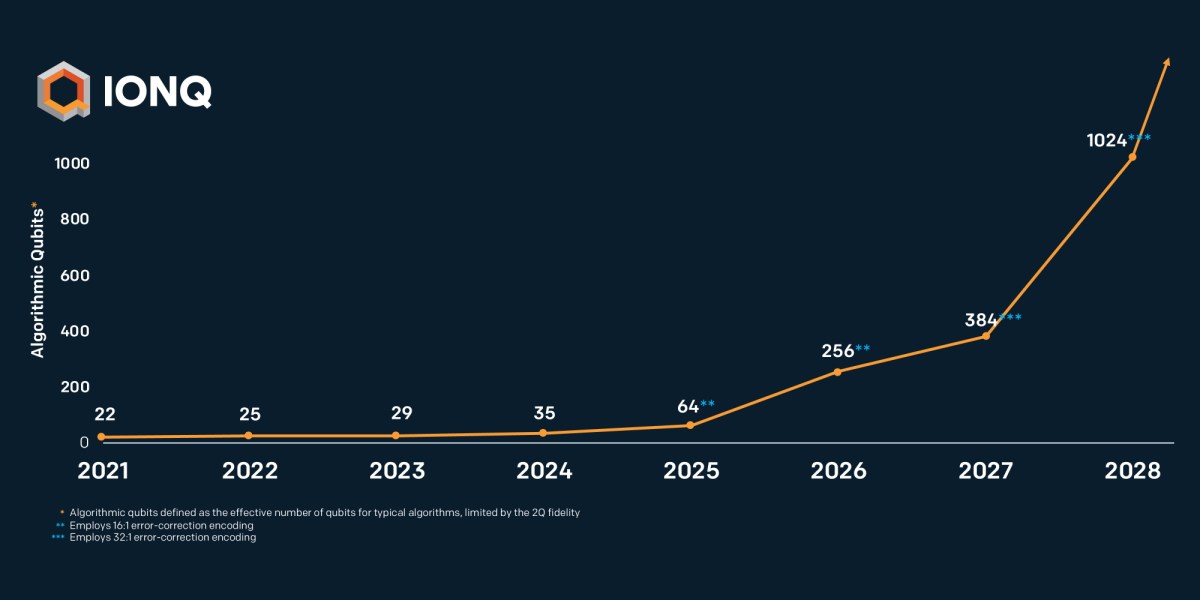